It's a warm, cloudless March morning at the Atlanta Braves spring training facility in West Palm Beach, Fla., but Ryan Klesko is in a sour mood. The burly left fielder, who led the National League champion Braves with 34 home runs last year, is in the midst of an excruciating slump. On top of that, he's been scratched from the starting lineup—again—because of a nagging back injury. 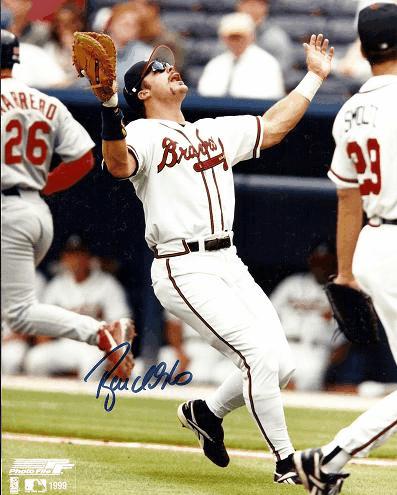 Ryan Klesko Press CenterKlesko wraps an ice pack around his torso and summons his bat makers, who are waiting patiently in the corner of the Braves' dugout. Over come Thomas and Kevin Lane. They are the owners and almost the entire work force of Carolina Clubs, the West Palm Beach-based company the brothers founded in 1990 while they were still playing in the minor leagues.

The Lanes show Klesko a template of his new bat, 35 inches long and weighing 321/2 ounces, a little bit heavier at the top than his previous model. Klesko nods approvingly. "Ryan can hit with a wet newspaper," grins brother Thomas, 28. "But he knows we're going to try to make it perfect, and the less he has to think about when he's up there, the easier it is to hit."

It's that kind of customer service that has gotten Carolina Clubs a foot in the door of a business once dominated by large sporting goods companies like Louisville, Ky.-based Hillerich & Bradsby Co., makers of Louisville Sluggers. The Lanes have developed an 8,000-bat-a-year business with $120,000 in revenues, catering to finicky customers like Klesko, Baltimore Orioles all-star Roberto Alomar, Cleveland Indians slugger David Justice and Braves rookie phenom Andrew Jones.

"We can't keep up with demand," Thomas Lane says, relating how he had stayed up until 4 a.m. the night before, finishing an order with brother Kevin and a cousin recruited to help out.

The last few years have seen something of a shakeout in the business, which the Lanes have exploited. In the mid-1970s Hillerich & Bradsby made 7 million wood Louisville Sluggers a year; now they turn out only 900,000. In their place, aluminum bats are now used by recreational baseball and softball players almost exclusively, and are permitted in high school and college games. Hillerich & Bradsby barely breaks even on its wood bat operations. Tullahoma, Tenn.-based Worth Inc. decided in 1995 to make only aluminum bats.

This has opened the door to what Denis Nolan, licensing manager for Major League Baseball Properties, calls "the microbreweries of the bat business." In 1990 there were no more than 6 companies making bats for the major leagues, all large, multi-product sporting-goods firms. Now there are 14; most new ones are boutique firms like Carolina Clubs.

"When you call us up, you're talking to the guys who are actually making the bats," says Kevin Lane. "You're not talking to a receptionist who will have a sales rep get back to you."

Kevin Lane, now 31, was pitching for the Osceola Astros, a Houston Astros minor league affiliate in central Florida, when he overheard several teammates complain about the quality of their bats. His father, George, was a skilled carpenter, and in the family pickup on a ride home from the ballpark, Kevin asked his dad to cut some bats. It was like asking an electrical engineer if he could change a light bulb. "He was almost insulted by it," Kevin recalls. Nonetheless, George made the bats, and Kevin brought them to his fellow Astros.

"I wanted an honest assessment, so I didn't tell them where they came from," Kevin says. The first teammate to use Lane's bat in a game hit a double off the wall in center field. From then on everyone wanted one. Within a few months there arrived from the major leagues an okay for their use.

In 1994 the Lanes took out a $20,000 cash advance on their credit cards to buy a commercial wood lathe, and built a new garage-size shop in the backyard of their parents' new house in the outskirts of West Palm Beach. George has since retired, but their mother, Mickie, helps out in sales, and their sister, Karen, when she's not waitressing, does the marketing and promotion.

Do the Lanes still dream about playing pro ball? "I think about it every day," laughs former pitcher Kevin. "But it's a good feeling when you turn on a game and someone swinging your bat plays well."

With his new Carolina Club Klesko has shrugged off his preseason slump and, through mid-May, is on track to hit more than 25 home runs again this season.