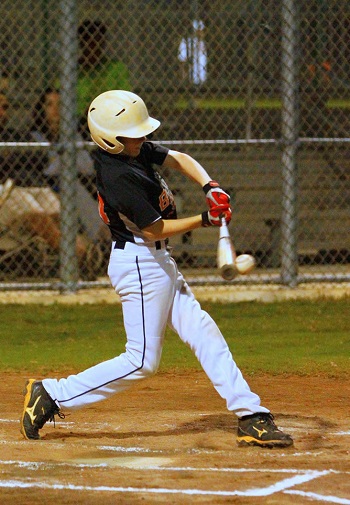 Carmine grew up with a passion for baseball and an appreciation of quality bats, which is why Karen Lane, Vice President of Marketing at Carolina Clubs, called on her nephew to help design and test the new MyWay metal bat she envisioned would inspire a new generation of baseball players.

"In light of the new rules for USSSA-licensed baseball bat manufacturers and the increasing popularity of USSSA Baseball and travel ball, my sister Karen saw a need to cater to youth league players who require certified aluminum bats," said Kevin Lane, President of Carolina Clubs. "Carmine, who at the time was participating in USSSA's 11 and Under AAA travel team, was our inspiration to launch Carolina Clubs' first aluminum bat, and he played a major role in the conceptualization of our MyWay product."

Carolina Clubs officially launched their USSSA-approved aluminum bat in August 2012. Since then, the MyWay metal bat has developed a wide following among 8- to 13-year-old USSSA youth ball players nationwide as a result of its unique design, on-field performance and ability to provide great "pop." The company uses X830 aluminum for the MyWay, which gives the bat greater durability and produces a sound closer to that of traditional wood bats, leading to the brand's new tagline: "Less Ping, More POP!"

"The MyWay aluminum baseball bat may be the newcomer to our product line, but it holds a special place in our company and family history," noted Karen Lane. "Not only was the bat inspired by our nephew, Carmine, but it's also a tribute to our father, George, who passed away in 2011. We named the bat in honor of Dad's favorite song, 'My Way' by Frank Sinatra. The graffiti-style graphics were designed by Carmine and intended to represent the streets of New York City, where his grandfather — whom he called 'Pop-Pop' — was born and raised."

Carmine was also instrumental in refining the aluminum bat's design, asking Carolina Clubs to extend the sweet spot and make the knob a bit larger for comfort. Today, the MyWay is not only used by Carmine and his teammates on the PPO Bengals Orange — a USSSA Boys 12 and Under Majors travel team from Pembroke Pines, Fla. — but it has become the USSSA-certified bat of choice for a rapidly growing number of youth baseball players throughout the country.

Carolina Clubs has a strong following among both professional ball players and amateur youth teams. Former Oakland Athletics center fielder Terrence Long, who is best known for going 7-for-18 with two home runs in 2001's five-game series against the Yankees, is a long-time fan of the brand. He recently posted on the Carolina Clubs Facebook page, "A special thanks to Carolina Clubs baseball bats for all the years of great service throughout my career. You guys are the best." That enthusiasm is shared by Long's 11-year-old son, who currently uses the MyWay aluminum bat in youth travel ball. After retiring from the major leagues, Long opened an indoor training facility called the Future Prospects Academy near Montgomery, Ala., and now spends his time coaching and fishing. "I truly enjoy teaching kids the game of baseball," he added.

Luis Alicea, former second baseman and base coach for several major league teams, also favors Carolina Clubs products. "During my 13 years in the majors, I used many Carolina Clubs wood bats; their quality was always a cut above the rest," he noted. Alicea currently serves as Executive Director of Baseball for the Elev8 Sports Institute in South Florida, where the MyWay is proving to be a hit. "Our USSSA youth travel ball and baseball camp kids really like the performance of the MyWay aluminum bat. In their eyes, the MyWay scores a home run."

Other Carolina Clubs enthusiasts include Nick Potesta and his son Nicholas. In an email to the company, Nick wrote: "I am impressed with the MyWay! It is everything you expressed, and more. But more importantly, Nicholas LOVES it. Today we had two games. In the first, he went 2 for 3. In the second game, he hit his first ever HOME RUN! The smile on his face was priceless."

The Lane family encourages users to share their stories on the Carolina Clubs Baseball Bats Facebook page. Customers who "Like" the brand's page will qualify to receive free shipping on all orders that include a MyWay aluminum bat. For more information, visit http://www.facebook.com/carolinaclubsbaseballbats.

About Carolina Clubs Inc.
Founded in 1991, Carolina Clubs is a family-owned manufacturer of high-quality ash and maple wood baseball bats for all levels of play, from youth training bats to custom adult baseball bats. The company expanded its line in 2012 to include USSSA-certified aluminum baseball bats for youth travel league players. Headquartered in West Palm Beach, Fla., Carolina Clubs produces its American-made baseball bats in upstate New York. The entire line of custom wooden baseball bats and USSSA-approved MyWay metal bats are available online at http://www.carolinaclubs.com or by phone at 888-466-2675, and can also be found in premier training facilities and sporting goods stores throughout the United States.