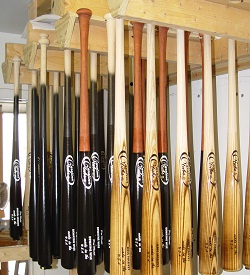 When Ryan Klesko began last season by hitting an Atlanta Braves-record 10 home runs in April, everyone wanted to know what was responsible.

The explanations seemed obvious. Braves manager Bobby Cox was using Klesko on an everyday basis for the first time. The hulking left fielder, in his third season, was coming into his own. And there was the baseball-wide power surge that resulted in a record number of home runs.

But when This Week in Baseball came asking for his secret, Klesko pulled out a brick red bat for the cameras. "The reason," he said, "is the Carolina Club."

Klesko is one of many big leaguers who swear by a growing number of upstart bat manufacturers who are taking their swings at veteran Hillerich & Bradsby, makers of Louisville Slugger. These days, it's not uncommon to see a major league bat rack full of lumber with labels such as Glomar, Hoosier, Kissimmee Sticks, KC Slammerand Young.

It's not that players have lost faith in Hillerich & Bradsby, which produces 750,000 bats a year and still accounts for 75% of the bats used in the major leagues. But many big leaguers, looking for an edge or at least a more personal degree of customer service, have gone elsewhere.

"We want them to think we give them the best quality and service," said Kevin Lane of Carolina Clubs. "At bigger companies, guys might call up and talk with a secretary. Here they can talk to the actual people making the bats."

Lane, 31, knows a thing or two about bats. He and his brother Tom, 27, spent years bouncing around the minor leagues hearing guys complain about the poor quality of their wood. Realizing they were never going to make it to the majors themselves, they chose a career that could involve their whole family and keep them close to the game.

Kevin Lane was still in the Astros organization in the early '90s when he asked his father, George, a general contractor, to make a few bats for him and his teammates. Kevin took the bats to the ballpark but did not identify their origin since he wanted to get an honest appraisal. His teammates, who included future Astros outfielder James Mouton, dubbed the durable bats "Wonder Boys" after the homemade model used by Robert Redford in The Natural.

George Lane installed a wood lathe in a tool shed behind their home in Boca Raton, Fla., and the business was born. In 1992, Major League Baseball approved the company's bats for use in pro ball. In recent years, the Lanes have developed a loyal following among major leaguers, including Klesko, Roberto Alomar and Andruw Jones.

These days, the Lanes produce more than 6,000 bats per year, but they've kept the business within the family. Kevin and Tom are responsible for production. Their sister, Karen, handles marketing and promotion and their mother, Mickie, helps out with sales. Mickie Lane also was responsible for the Florida company's odd choice of name for the product; she once harbored hopes of retiring in the Carolinas.

Respiratory problems prevent George Lane from working in the dusty workshop, but he inspects each bat and travels to spring training camps with his sons to promote the product. Various uncles, aunts and cousins chip in when extra help is needed.

The Lanes just moved their headquarters north to a vacant lot off a dirt road in West Palm Beach. The foundation for the Lanes' new home is in place, but so far the only permanent building is a lime green structure that houses the growing bat making operation.

Inside, more than 800 billets of ash from lumber companies in Pennsylvania, New York, Vermont and Canada are stacked neatly in bins. Bat wood is graded as "major" or "minor-league" wood, with the big league wood having a straighter grain, greater density and generally better quality.

"Some guys want a wide grain," Tom Lane says. "Others want so many grains they can't possibly count them all. It's all a matter of personal preference."

George Lane once owned two construction companies in New York that specialized in custom woodwork such as cabinets and staircases. He found that the production of bats was very similar to that of balusters, the wooden columns that connect banisters to staircases.

The Lanes can produce any wood bat model by making a template and attaching it to the lathe. The template allows them to cut the billet identically, often in less than a minute. While the wood is still spinning on the lathe, it's sanded several times. Once the machine is stopped, the bat is examined for imperfections. Flawed bats are set aside and sold as personalized display models or used to make bat lamps, barstools and walking canes.

While Kevin Lane handles most of the cutting, Tom does the finishing in a separate room. This involves coloring the bats in a black, natural or walnut finish and applying the company label. Unlike some companies, whose labels are embossed into the bats, the Lanes use a special polyester-nylon label that goes on more like a sticker. That, the Lanes say, cuts down on cracking.

The Carolina Clubs became notorious late last season when MLB banned the walnut version. League officials felt the company's walnut was more of a red. The news bothered Klesko, who estimates that he hit three-fourths of his 34 home runs with the club. He could, however, continue to use the black and naturally-finished bats.

Klesko, who spends much of the off season in south Florida, has gone to bat for the company, offering technical advice and recommending the bats to other players.

Since baseball players from tee ball through college generally use aluminum bats, there is little retail market for wood. Companies such as Carolina Clubs compete for a share of the professional bat business.

Major league clubs are responsible for providing their players with bats, although the players can select which company and model they want. Clubhouse managers place orders as early as November for spring training delivery.

That makes this month a busy time of production and shipping, but it's also a vital part of the sales season. The Lane brothers will spend many March days traveling through Florida visiting spring training camps, then staying up much of the night making bats. So that they don't waste a minute, they'll spend nights in a trailer next to the shop until their future home is completed. 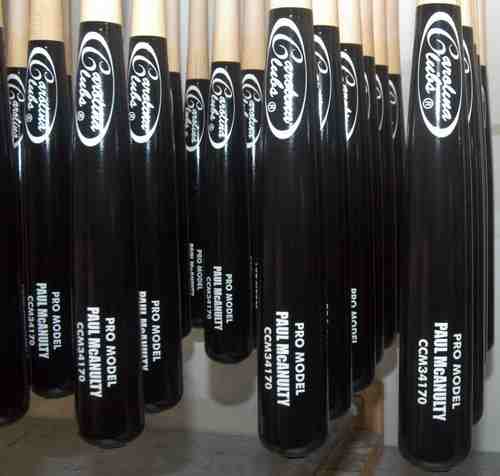 Already they've become well-known in baseball circles, easily recognizable in their gray t-shirts that read, "Carolina Clubs: No Cork Needed." Last spring, Alomar came over to see the operation after an Orioles practice in Fort Lauderdale. Even players who don't use their bats, such as Bobby Bonilla and David Justice, make it a point to say hello.

The Lanes watch games and highlights closely to see who is using their bats. Baseball players, a superstitious lot, have a love/hate relationship with their bats and some switch companies in the hopes of breaking a slump. Some just like to rotate their stock.

"We'll call a guy up and ask him if there's something wrong with the bats," Tom Lane says. "Sometimes they're just out of bats and we're able to overnight to them wherever they are."

Like many baseball players, the Lanes have made a pilgrimage to Hillerich & Bradsby headquarters. That company has more than one hundred years of experience than Carolina Clubs, but the brothers have big plans. They hope to grow the company to the point where Karen can quit her job as a waitress and the bats can provide a comfortable retirement for their parents.

"We've always been family-oriented, " says Kevin Lane. "Our baseball careers were over and we thought about coaching and scouting. With this, it's a family operation."